Continued from Part I of our Sylmar Earthquake Series 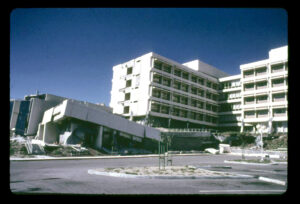 Olive View Hospital was severely damaged during the 1971 earthquake.

Before the Sylmar earthquake, the only major piece of legislation to mandate earthquake-resistant construction was The Field Act, which was passed after the 1933 Long Beach earthquake and authored, in part, by John Gould, a Degenkolb Founder. The Field Act only targeted California schools, but it marked the start of government-mandated regulations for how to build in earthquake country. Henry Degenkolb’s contribution to earthquake engineering included his work conducting materials and connection testing work at Treasure Island, authoring numerous technical publications, and visiting the sites of major earthquakes around the world to observe, photograph, and document conditions, deepening his understanding of how buildings performed during major seismic events. By 1971, Henry was regarded as a leading earthquake engineer, and Degenkolb Engineers was a well-known seismic firm.

Based on the damage and seismograph readings from Sylmar, it became apparent that earthquakes performed much differently than had previously been understood, particularly when it came to strong ground motion. During the ‘quake, the shaking was stronger, it lasted longer, and it underwent pulses. Suddenly, the profession realized it had to start thinking about building design differently and taking steps to understand them more thoroughly. The Sylmar earthquake drew attention to the need for even more seismic instruments in buildings and on the ground to record seismic events when they happened. Chris Poland, CEO emeritus of Degenkolb (1990 to 2013) led the committee that was part of the California Strong Motion Instrumentation Program (CSMIP), which placed seismographs throughout California.

Amongst the rubble of damaged buildings, one common failure point started to emerge: non-ductile concrete. Though still a kid in ’71, Jay Love, Degenkolb Senior Principal says that the Sylmar earthquake had a significant effect on the industry’s understanding of non-ductile concrete and the importance of horizontal ties in the rebar detailing of concrete columns. Jay points to Olive View Hospital, where much of the aesthetic of the building’s design included exposed concrete and concrete columns. Concrete, though strong, isn’t flexible on its own. Unlike steel, which can bend and flex without breaking, unreinforced or poorly reinforced concrete cannot; when it fails, it bursts apart. In 1971, rebar was being used to reinforce concrete columns, though most of the rebar was installed vertically. This configuration provided support and strength to the concrete column for gravity loads, but it couldn’t prevent the brittle shear failures.

During the Sylmar earthquake, the concrete columns experienced lateral forces—they shook side to side. The lack of horizontal ties allowed shear failures to occur. Additionally, because the vertical rebar lacked sufficient horizontal ties, these vertical bars buckled and the concrete material shattered, which often caused the entire column to collapse. Though it wasn’t the first time the industry had seen non-ductile concrete failures during an earthquake, the extent of it and the resulting damage in 1971 was alarming. Based on lessons learned from Sylmar and other earthquakes, as well as seismic research conducted at leading research institutes throughout the world, ductile concrete is now standard in the industry. 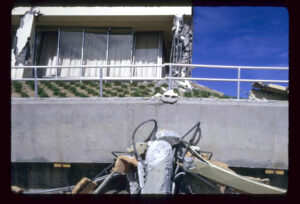 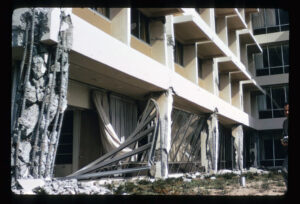 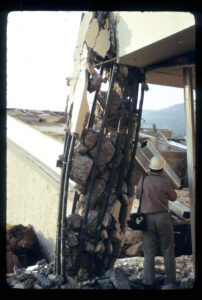 Article
When Mother Nature Forecloses on a Property
04.23.2021
Read More