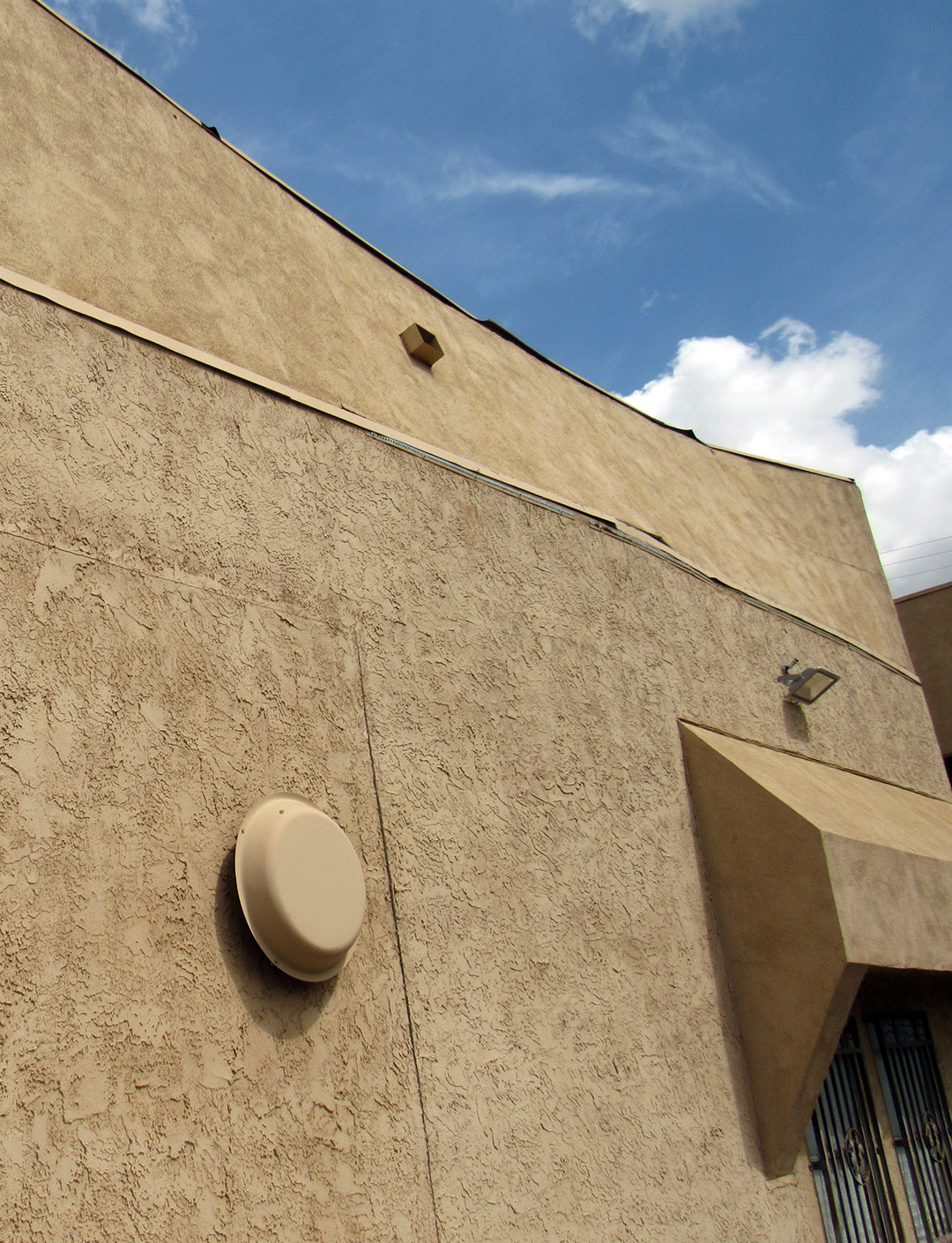 Roof half wall leaning as a result of the collapsed roof.

It was early Spring when I pulled up to a retail building where I’d been sent to investigate a collapsed roof. From the street, the only signs of something fishy was a slightly bowed parapet wall, which was leaning inwards. Once inside, the scope of damage was readily apparent—a large section of the central roof had completely collapsed. Amongst the wreckage of roof framing,  ceiling panels, and wet insulation were damaged fish aquariums and their related accessories. The unmistakable scent of fish—earthy and musty, like fresh-tilled soil—lightly perfumed the air. Thankfully, most, if not all, of the aquariums’ finned inhabitants had been saved by the owners of this “fishstablishment.” But the pressing and immediate issue was the enormous hole in the roof—what had caused it?

As I combed through the debris, clues began to emerge. Ceiling tiles showed evidence of water staining; the metal ceiling grid was corroded with dark red rust, and the batt insulation was darkly stained and matted. Wood roof truss chords were darkly stained and covered with white and yellow mold. I took out my knife and inserted it into several of the mold-laden truss chords. Metal pins in the trusses were heavily corroded and the plywood roof sheathing was decayed and deteriorated. I also noticed a curious plastic sheeting, not dissimilar from radiant barrier material, had been stapled to the bottom truss chords.

I ventured into an area of the building where the roof had not collapsed and was able to observe the roof conditions. Even here, with some distance from the collapsed roof, there were signs of moisture exposure. 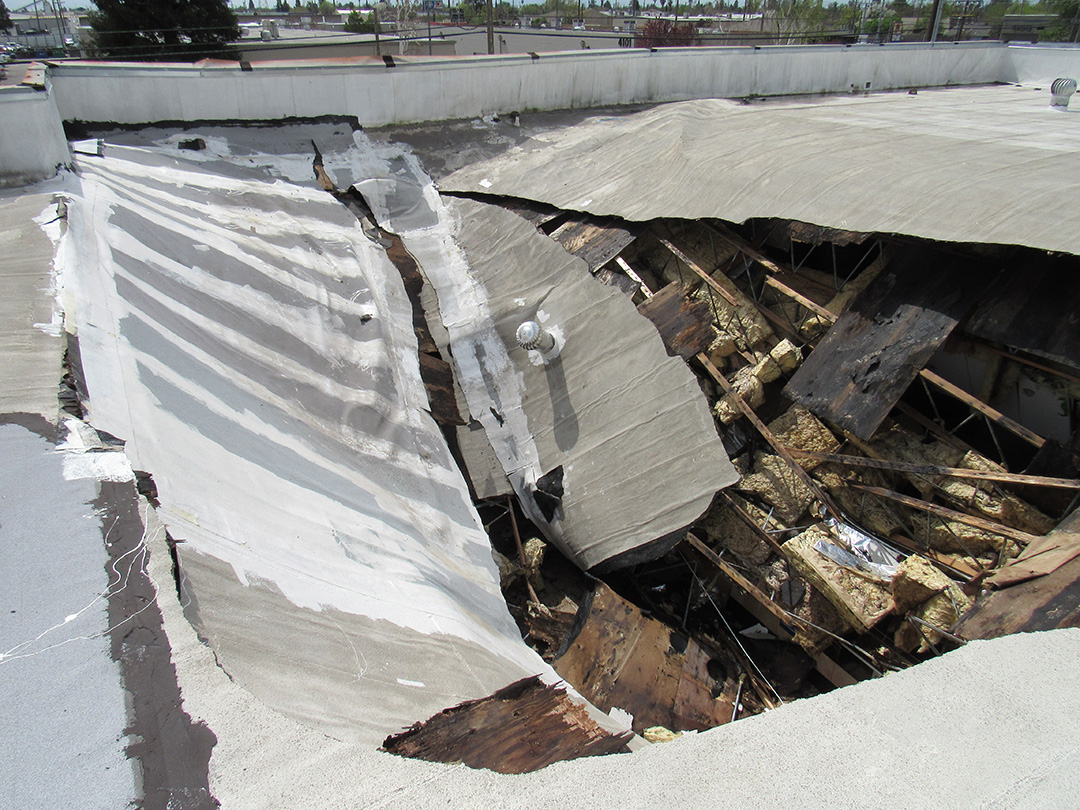 View of the collapsed part of the roof. Newer patch material readily visible.

In search of additional clues, I ventured onto the roof. Like many commercial buildings, it was a shallow sloped roof with scuppers in the front parapet walls. Most of the roof appeared to be in good condition, with the exception of the collapsed area. Interestingly, I noted the collapsed had been patched over with additional roofing materials. Using Google Earth, I was able to determine that the patch had been recently installed—within the last several months—as it wasn’t present in the Google Earth image. The owner reported that during the last two years, multiple roof leaks had been repaired by a contractor. With my head swimming with information and seemingly related clues, i was primed to solve the puzzle, but I was floundering a bit for an answer. 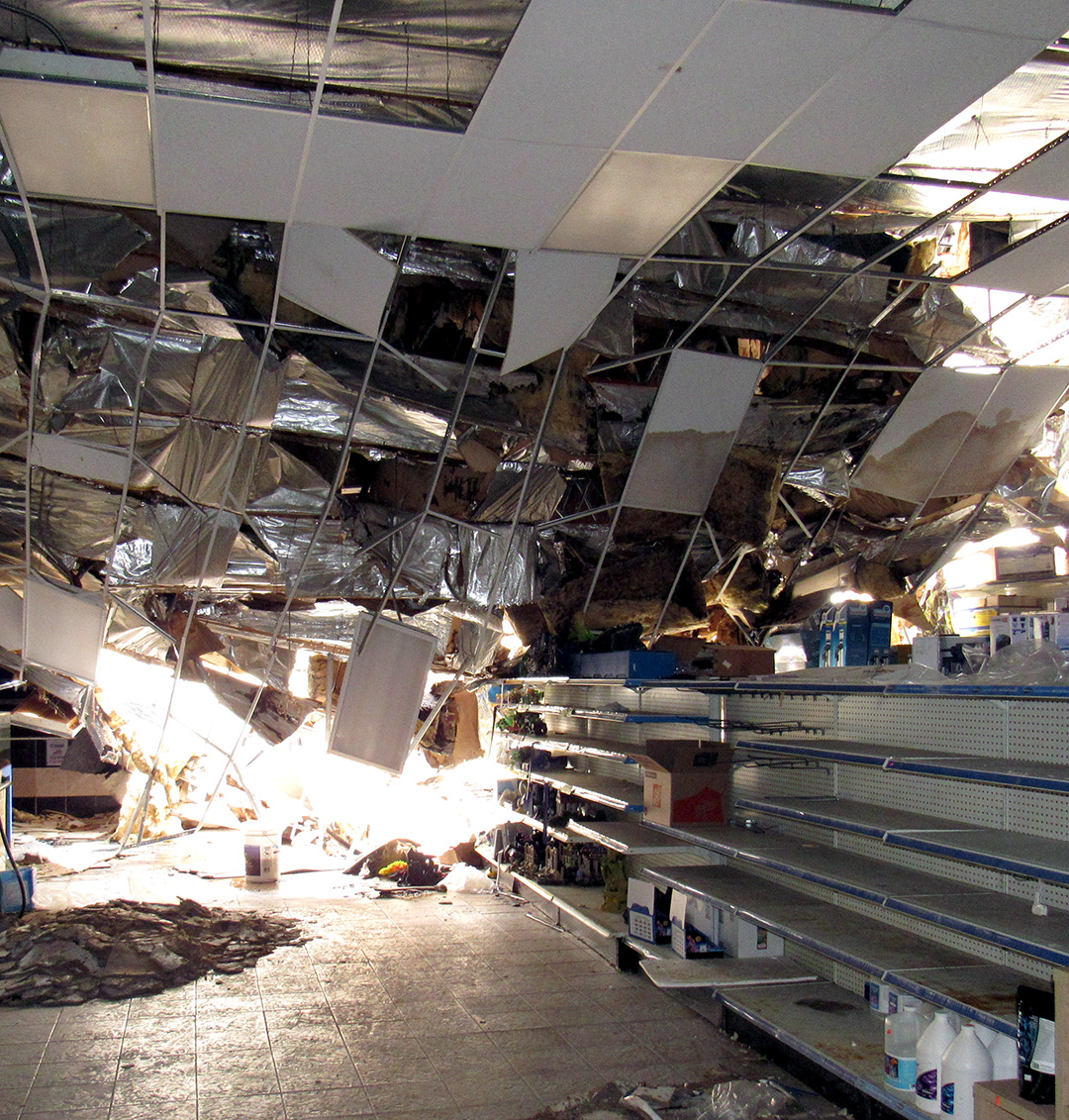 View of the collapsed roof from inside the building.

The damage to the interior components was more severe and long-term than what one might expect from a roof collapse due to ponding. There also hadn’t been any significant rainstorms in the area for several weeks. As such, it was a seemingly a “blue sky collapse.” I reflect on the reported roof leaks and patching–perhaps a red herring? A hypothesis emerged—perhaps the roof wasn’t leaking from the outside; perhaps the water was coming from inside the building. 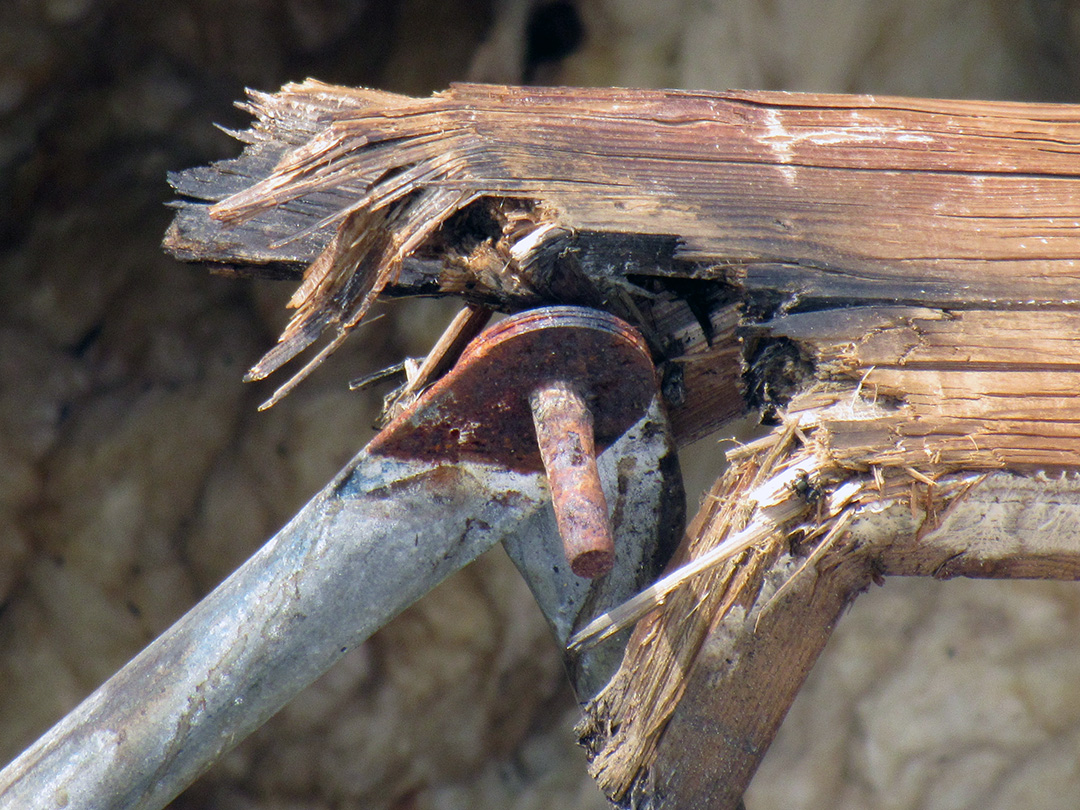 Among the roof debris and damaged aquariums stood a few that were spared; these aquariums had no covers, allowing water to easily evaporate from them. It all added up—numerous open aquariums had created warm, moist air conditions throughout the interior of the building. Water vapor migrated up through the ceiling, condensing on the underside of the cold roof deck. After wetting the wood, water droplets then fell back down onto the plastic sheeting and suspended ceiling surfaces. Not only were the aquariums producing water vapor, but as the daytime temperatures increased, the water trapped in the ceiling would again vaporize and rise up to the underside of the roof deck where it would later condense once again. There were multiple cycles of daily water vaporization and condensation occurring within the building, even during the spring and summer months!

The scale of the problem was large and permeated to all parts of the building. The worst of the damage, however, wasn’t readily visible to the occupants, as it was hidden behind layers of acoustic ceiling and plastic sheeting. This proved to be crucial in terms of insurance coverage and was an important aspect of our cause and origin report.

As I left the site, I didn’t want to waste what was left of a nice Spring day—carp-e diem! I thought, as I drove off into the sunset. 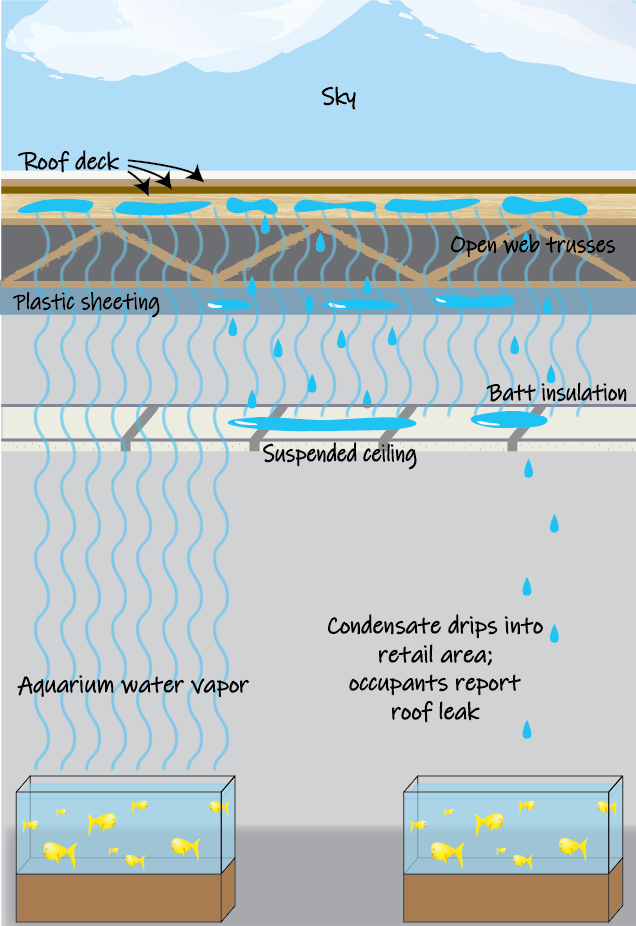 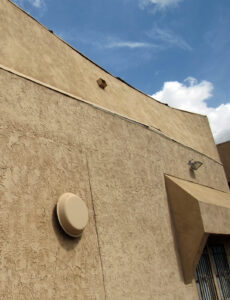 Roof half wall leaning as a result of the collapsed roof. 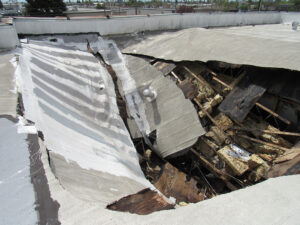 View of the collapsed part of the roof. Newer patch material readily visible. 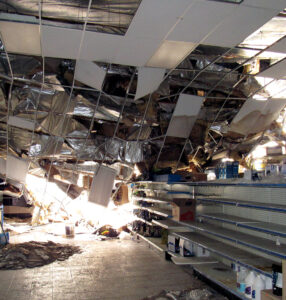 View of the collapsed roof from inside the building. 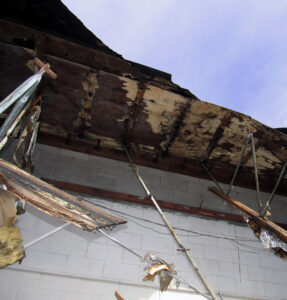 Looking up to the sky through the hole in the roof. 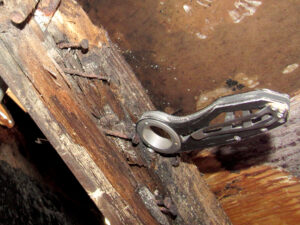 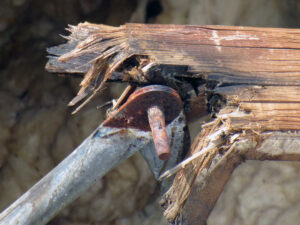 Article
The Structural Engineering Office of the Future
07.10.2020
Read More