The Degenkolb team continues to explore the streets of Mexico City. We have seen buildings that do not have damage to the main columns, beams or bearing walls, but that does not mean there is no damage.  Often the  damaged are found in the non-structural systems like the exterior.

Many Mexican buildings have damage in the brick infill and partition walls between concrete columns.  Often the plaster on the face of the walls can be found on the streets;  delaminated from the brick or concrete on the exterior. Even for new building, we observed part of the exterior’s wall brick veneer collapsed on the sidewalk, leading to concern by the building occupants.  Often perception is worse than reality.  Could these failures have been prevented by using better anchors or adhesive? Should these building materials be avoided on exterior walls when they present a falling hazard for people around the building?

Even when the exterior is more like what is found in the US, there can be damage. Below shows a collapsed storefront in Colonia Copa. Anchors used to attach to the concrete slab were very small and over 60% of the anchors slipped out of the concrete holes instead of breaking the concrete.  Could this have been avoided with better installation and inspection? 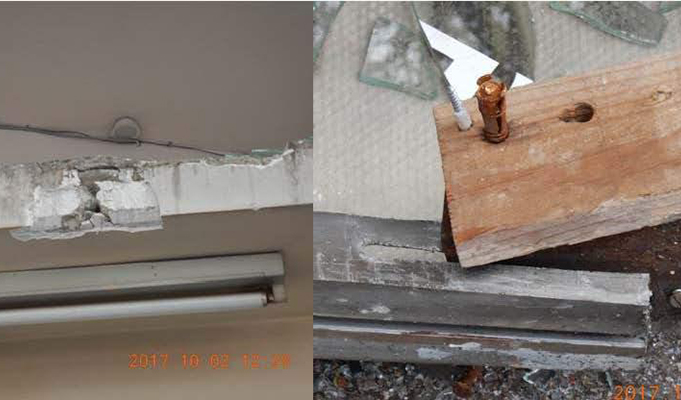