The City of Ridgecrest was greeted with strong ground shaking before they could celebrate Independence Day.

On July 4, 2019, most Californians were enjoying the day off to celebrate July 4th, Independence Day, but a few Degenkolb engineers and residents of one city in particular, the City of Ridgecrest, got a little more excitement than they bargained for.

At 10:33am, a Magnitude 6.4 earthquake rippled through Searles Valley, its epicenter located eleven miles from Ridgecrest, CA, where it caused house fires, non-structural damage in businesses, and road cracks. Reports indicate the seismic event was felt as far as Las Vegas to the east, Bakersfield to the west, and Los Angeles to the south. 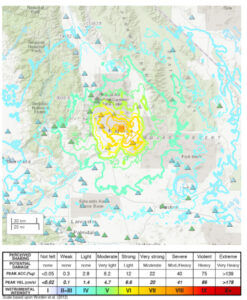 Degenkolb Engineers was contacted soon after the event by Ridgecrest Regional Hospital to assist in assessing the structural damage after the event.  According to USGS, the shaking intensity at Ridgecrest Regional Hospital was approximately 6.5, which is considered strong. Degenkolb immediately assembled a team composed of Richard Franco, Daniel Zepeda, Justin Tan, and Daniel Phelan to conduct the task.  Our team arrived on site on July 4, 2019 at around 5:15pm.  The Hospital was completing a full voluntary evacuation of their patients and staff when our team arrived.  Degenkolb was greeted and briefed by the hospital staff who then walked the team throughout the hospital while assessing the buildings.  Our team was glad to see that no structural damage had occurred in the Hospital structures and a couple of their clinic buildings. While driving around town, it appeared the town too had fared well against the earthquake with no signs of exterior damage to any of the structures along the way. 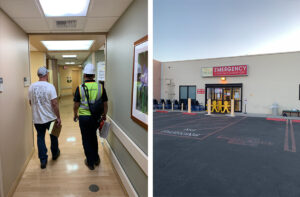 After a long day, the team headed back home to enjoy the 4th of July festivities and celebrated a successful survey by having dinner together. 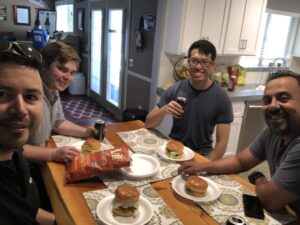 The Degenkolb team enjoys 4th of July after a successful reconnaissance.

Just when the July 4th festivities were winding down, Ridgecrest was rattled again at 8:20pm on July 5th by an M7.1 quake. A mere 34 hours after the earlier M6.4 event, which USGS recategorized as having been a foreshock to this larger earthquake.  Our Degenkolb team, always up for the challenge and not shying away from earthquake chasing, quickly reached out to the Hospital to understand how they were affected. 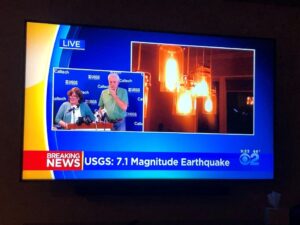 Dr. Lucy Jones on the news after the M7.1 EQ 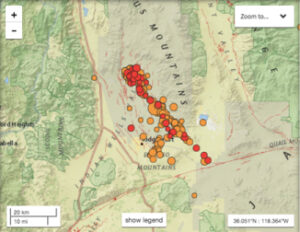 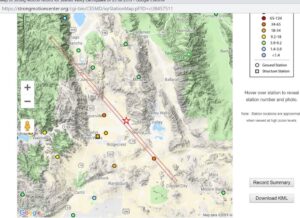 The following morning, Richard Franco, Daniel Zepeda, Justin Tan, Daniel Phelan, and Sandy Hohener headed back to the site to re-assess the damage.  The team arrived at 12:45pm and were again greeted and briefed by the hospital staff before the team began their assessment of the hospital buildings.  Our team was surprised but glad that this stronger earthquake also caused no structural damage to the Hospital.  The facility was also excited to hear the news and was in the process of getting the hospital ready for reoccupation. 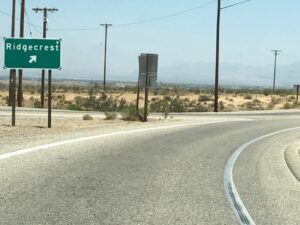 Entering the City of Ridgecrest. 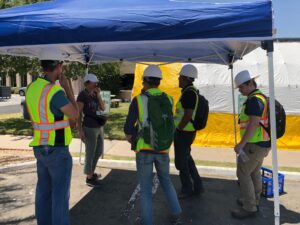 The team meets with hospital staff. 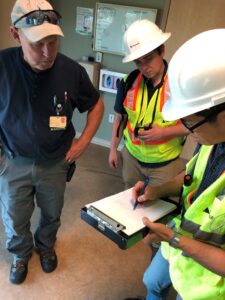 The team discusses with hospital staff.

During our visit to Ridgecrest our team also visited the nearby Home Depot and Albertsons stores to see how they had fared in the event.  It was amazing to see that both stores had suffered little non-structural damage and no apparent damage to their structures.  We had heard news reports indicating many of the stores had shut down due to broken merchandise, but both Home Depot and Albertsons returned to operation within hours of both events.  We spoke with a worker at Home Depot and he informed us that they received a lot of support from their franchise stores to get back to business and we assume it was the same for Albertsons.  Despite their proximity to the large event, Home Depot only had one heavy stacked pallet fall from the warehouse racks.  They indicated that many of the pallets slid forward during the earthquake, and as the first priority following the earthquake re-set the pallets to the back of the racks. 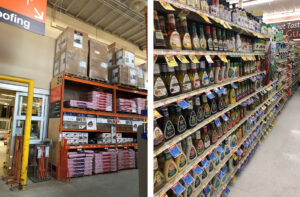 Shelves and pallets at Home Depot and Albertsons after the M7.1 EQ.

Before leaving the area, our team headed towards the small town of Trona, which was reported to have suffered severe damage.  Along the way we found some of the roads had displaced vertically causing minor traffic, which ended up being a good stopping zone to better understand the associated earthquake ground movement.  In some areas our team observed vertical offsets that were over 1.5 feet.  However, it was not clear whether the offset was due to vertical displacement or settlement, but we noticed many geologists were in the area trying to make sense of it.

It will be interesting to see how the USGS refines the shaking intensity maps in the coming weeks, and what we can learn from the geotechnical community.  You can see from the current USGS map below that the fault seemed to have ruptured to the Northwest, away from Ridgecrest.  This might have spared Ridgecrest from the worst of the damage-causing ground shaking. 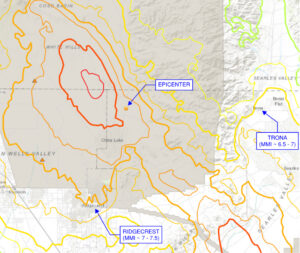 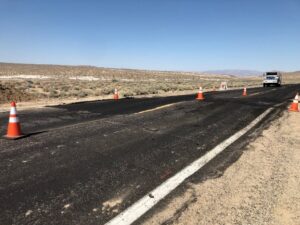 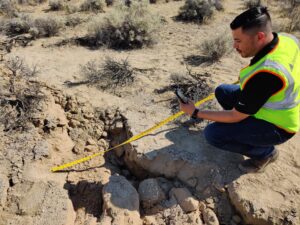 The team investigates the fault ruptures.

Upon reaching Trona it was clear that the small town had suffered a significant amount of damage, even though the shaking intensity that is currently being reported by USGS is similar to what Ridgecrest is thought to have experienced.  Most of the area is populated with single story homes without the benefit of modern seismic codes, and the area is located on an old lakebed. The damage appears to have been primarily caused by settlement and lateral spreading as indicated by the ground movement / cracks which appeared towards a lakebed.  Unfortunately, the buildings that were damaged did not appear to have any significant reinforcing in them to prevent the damage. 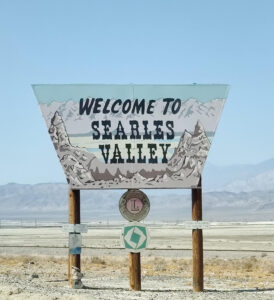 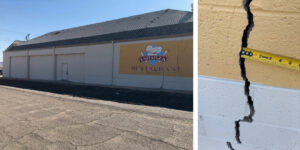 Examples of earthquake damage in Trona.

The trip proved to be beneficial to our Hospital client and educational to our team.  Although the magnitude of the earthquake was high there is still a lot of research to be conducted to better understand the shaking intensity and related damage under the populated areas.  We hope this can be accomplished in the near future by our team and other researchers that were in the area. 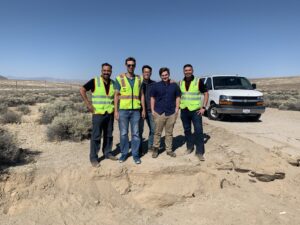 The team poses for a group photo above a fault rupture.