The team departed our hotel at about 8:30 Saturday morning and headed south about 90 miles to Jojutla de Juárez.  The highway climbed to over 10,000 feet above sea level as we left Mexico City.  The view from the top of the mountains surrounding the city gave us a real appreciation for the basin that Mexico City is located in.

Jojutla is the municipal seat of the State of Morelos and has a population of approximately 50,000.  Jojutla is located on a relatively flat plane next to the Rio Apatlaco, which makes it an ideal location for farming and raising livestock, which are the primary industries in the area. 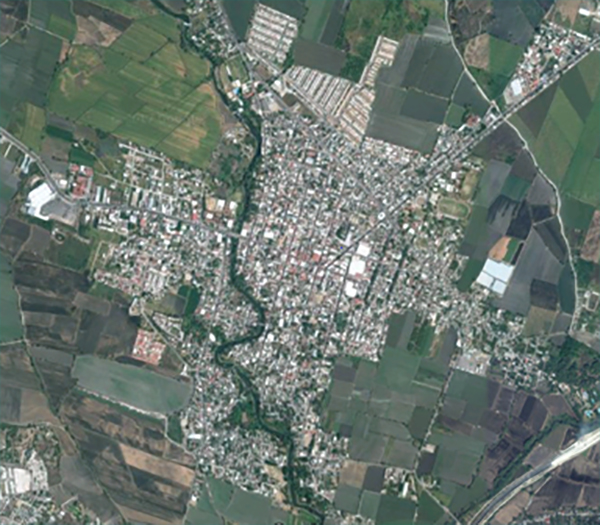 The earthquake caused wide spread damage to Jojutla, which is located only 45 miles from the epicenter of the earthquake.  Many of the buildings in the central business district were heavily damaged, with partial and total collapses.  The primary building type we observed was nonductile concrete with masonry infill, which is the standard type of construction for much of the area.  There were whole blocks cordoned off, and demolition and clean-up operations were still under way.  On some streets, building owners were already making repairs to buildings that had only minor damage.  Unfortunately, the same construction materials and techniques were being used.

The local officials, or delegation as building owners were calling them, had taken to tagging buildings by spray painting green, yellow or red dots on the front of the buildings.  We ran into a group from the government that was going back around to all the buildings that were tagged and noting their address. 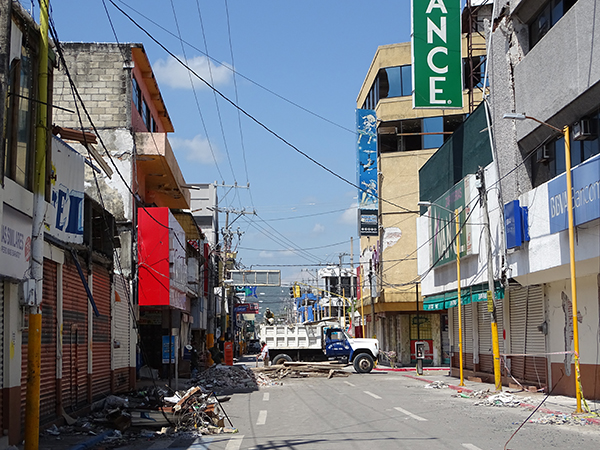 While many of the streets and shops were closed, just one or two blocks over it was business as usual at the two main markets in town.  We even noticed that stores were operating in buildings that were yellow tagged and that some business owners were inside their red-tagged buildings.  While there were many police and soldiers from the national guard in the area, there was no one keeping people out of the closed off areas.  It appeared to us that those who were inside their condemned buildings were concerned about theft of their shop inventory.  In the building pictured below, which suffered a partial collapse, the business owner had crews inside and on top of the building removing their business inventory before the government was going to demolish the building.  Similar to Mexico City, the communication from the government was vague, as the owners of this building did not know how long they had to clear it out. 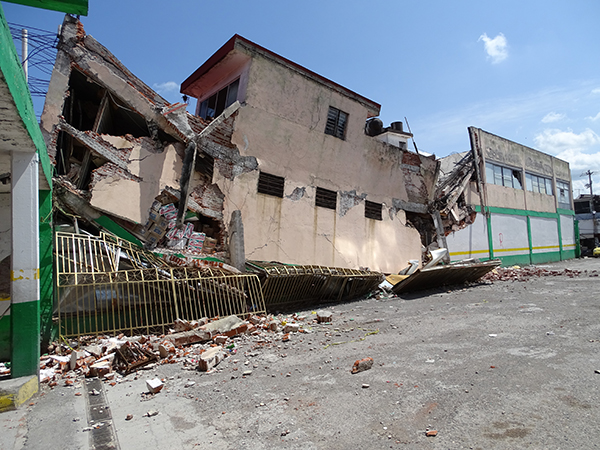 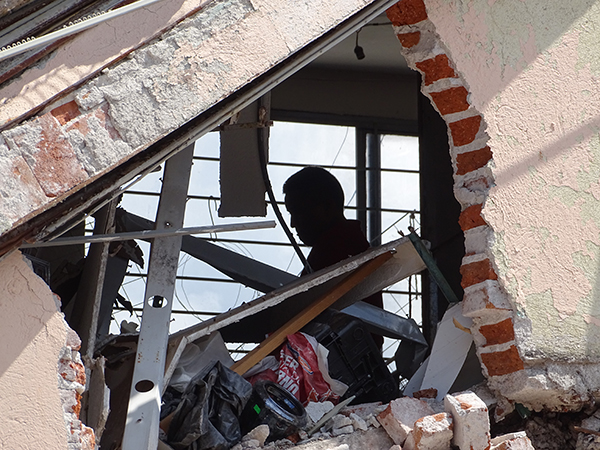 One other interesting building we viewed was the main cellular phone network exchange for Telmex.  The building was partially collapsed and, according to the security guard stationed out front, was still shifting.  The building amazingly still had power and was operating and an emergency generator had been brought in just in case power was lost.  However, no one was willing to go inside if needed to transfer power over to the generator or to perform any maintenance on the network equipment.  The guard indicated that this was a major exchange for the whole state of Morelos and that if it went down, cell phone service would be lost over a large part of the state.  Telmex was working to transfer the network traffic to other locations, but still needed the building to operate until the transfers were complete.  With out this vital communications link, the city and people of Jojutla would have been even more cutoff from the outside. 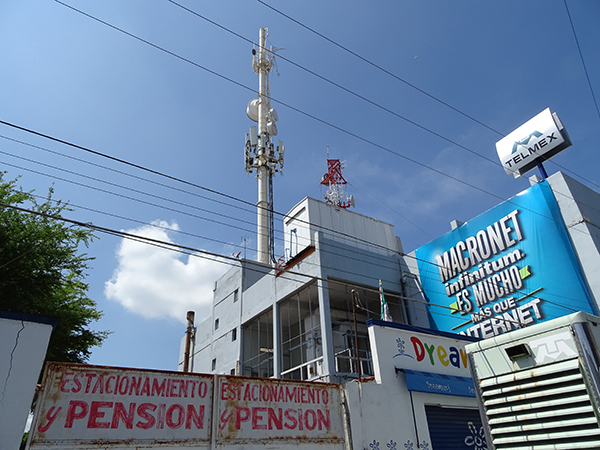 After viewing the scope of destruction that the earthquake inflicted on the town, it is clear that the recovery process will be slow and expensive.  While the type of damage that we observed in Jojutla was typical of the style of construction, the trip reinforced several ideas about the importance of resilience, especially the need to get people back to their normal daily lives and planning for disaster response.  Finally, the most important and pressing need, one which has been identified in past earthquakes, is the need for improved earthquake-resistant designs using locally available materials and methods.

As we headed back to Mexico City, we stopped on the southern edge of town to observe a building that had sustained a partially collapsed floor.  The building was a nine-story reinforced concrete building, that was previously seismically strengthened by jacketing of the concrete columns with steel angles and plates.  However, we noticed that the floor that sustained a partial collapse did not have strengthened columns.  Upon closer inspection it was observed that the strengthening of the columns was not uniform or regular throughout the building.  We guessed that perhaps only the columns that were damaged during the 1985 earthquake received the column jacketing. 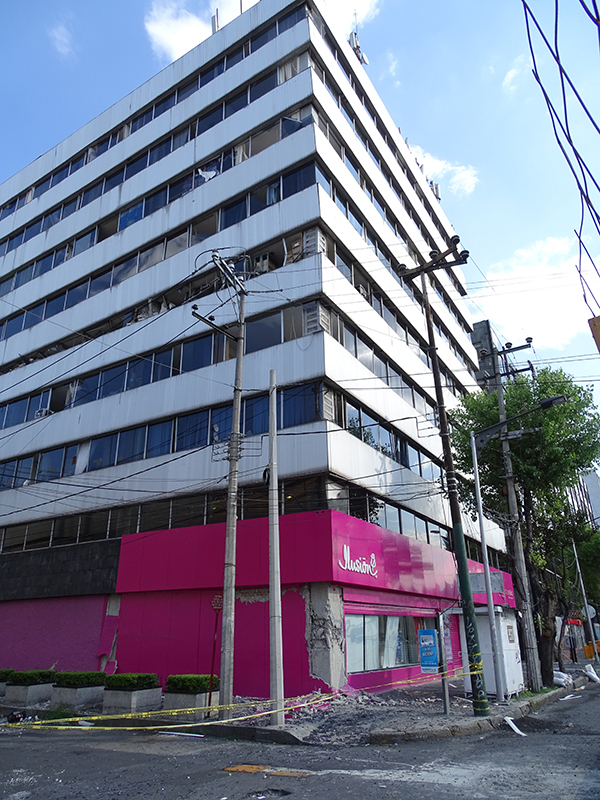 This building again reinforces the need to be constantly improving seismic evaluation and upgrade techniques and the need for regulations to address existing buildings that pose a danger to the public.  There are many nonductile concrete buildings scattered all over California.  This earthquake once again highlights the need to address these types of structures before a similar disaster occurs in California.