It was a grey, rainy day in the Pacific Northwest. I was investigating reported roof leaks at a single-family residence on behalf of a major homeowner’s insurance provider. The insured/owner of the house was a 75-year-old widowed man who lived alone except for his dog, a Labrador retriever. The house was cold, dimly lit, and smelled faintly of mildew. A quick glance around the interior revealed aged interior finish stains that spoke of a history of moisture contact.

The owner was suspicious and nearly directly accused me of being a “hired gun” for the insurance company. He was certain that I was there to deny his claim and any sort of money he might have coming to him. I tried to explain that I was an engineer hired by his insurance company to investigate the damage and provide my opinion on the cause(s) of the damage that had been reported, but my explanation fell on deaf ears. My questions about the history of the roofing materials and interior paint recoatings were met with gruff, nonresponsive answers. He scowled as he looked over my business card and bag of tools and test instruments, then muttered something about getting it over with.

As I examined the attic space, the tidal-pattern stains on the sheathing and the absence of ventilation gave classic indications of an aged and ongoing problem. The attic examination also revealed the presence of wood rot at the sheathing and framing members, making it unsafe to directly access the roof. I then moved my examination outside. From the safety of a ladder, I was able to access the roof and observe the three-tab asphalt shingles, numerous missing shingles, exposed and faded roofing underlayment, and a patchwork of temporary shingle repairs that had become permanent over time.

I returned my attention to the homeowner to discuss my observations and ask some follow up questions regarding the shingles and history of repairs. The homeowner was still suspicious, and even cagey with his responses. I spotted the dog over on his bed in the corner of the room; to satisfy his apparent curiosity about this visitor in his house, I walked over, knelt down, and began to pet the dog. I was immediately met with a welcoming dog smile and a thumping tail. I asked the homeowner how old his dog was and his name. 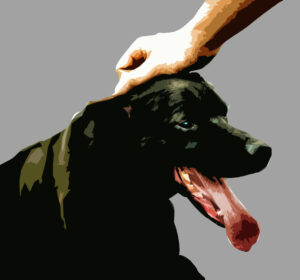 “Buck’s fourteen; all I got left now,” said the homeowner, still a bit gruff.

I continued to scratch Buck’s ears, clearly earning the approval of the dog.

“I put that roof on myself. Must’ve been….30? Maybe 35 years ago,” the homeowner shared, unprompted. He seemed to be softening his stance a bit. I complimented his effort and told him that I had shingled my roof in 2005 with my brother-in-law. He nodded, knowingly.

I shared that it was the hardest work I’ve ever done – that there’s a reason there aren’t any old roofers.  That comment got a smile out of him.

“Yeah, that old roof got us through some tough times. Seen some storms. Patched it up a few times.” He paused a bit, then went on. “At first it was just a few stains, but it’s gotten a lot worse over time. What do you think; will I get any money? I’m on a fixed income, you know…”

I reminded him that I wasn’t an adjuster and that those decisions weren’t mine to make. He looked satisfied with my explanation but had questions about the next steps in the process. I explained that I would report to his adjuster what I had seen and discussed with him, and that they would likely want a written report, which would take a bit of time to produce.

The dog was now on its back, letting me know the ideal spot to scratch for maximum dog relaxation. The owner, too, seemed a lot more relaxed than when I’d arrived at his doorstep.

“Do you think it’s time for a new roof? I don’t know how I’m going to afford it…” he lamented.

I replied that I understood, but I felt that 25 years is about the end of the useful service life of a 3-tab asphalt shingle roof. I joked with him that if he got 30 or 35 years out of his, he was ahead of the game. We laughed together as I picked up my tools and headed for the door. I shook his hand and thanked him for his time. He smiled and thanked me for mine and for the information about his house. As I opened the door to leave, a cold wet nose pressed up against my hand for one last scratch.

Always pet the dog is advice I give to all investigators. It’s a metaphor for extending empathy in our technical investigations and for never losing sight of the people – and dogs – with whom we come in contact. It can go a long way in establishing trust and understanding and facilitating communication in arenas where adversarial positions are far too common.

Article
Design and Function: A Creative and Innovative Engineering Solution for an Exhaust Tower
06.13.2017
Read More