Facilitating the Design: A Case for Construction Engineering and Structural Engineering Co-Existing 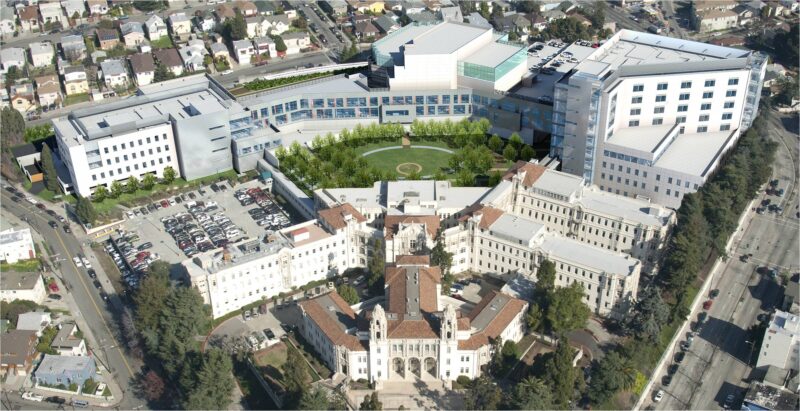 Before a critical building—like a healthcare facility—can open its doors to patients, medical personnel, researchers, and others, a design team is hard at work making sure the ideas can become a reality. A crucial step between design to opening day is construction engineering. Known at Degenkolb Engineers as CE for short, construction engineering facilitates the design of a structure by—sometimes literally—providing the necessary support which brings a design to life. Although CE serves to facilitate the design, its importance to the success of the whole project cannot be overstated. Robert Graff (Principal, San Francisco) knows this reality well. “Every project is different and shaped by the site itself.” Whether it’s accounting for existing adjacent structures, the unique geography of a lot, or every stakeholder involved, CE is there to find a solution.

When building Highland Hospital’s new acute care tower in Oakland, CA, the design team encountered a challenge with the Satellite Building and a significant grade change from one end to the other. In addition, there was an existing building scheduled for demolition that partially retained this very grade change. Degenkolb was providing SEOR services for the new hospital tower as well as bridging documents for the Satellite building, but was also contracted to provide construction engineering services for the entire project. By engaging our CE team early, all involved were able to find an economical, efficient way forward. The solution: a three-story retaining wall—comprised of new shoring wall elements and existing building walls reinforced with new tie back anchors—that separates the Satellite building from the hillside. By employing this method, the building no longer had to serve as the retaining wall, which proved to be more cost-effective, improved the seismic performance of the building itself, and repurposed parts of the existing building to facilitate the new Satellite building. Additionally, this allowed the architects to have the building “be what it wanted to be,” preventing unnecessary architectural sacrifices that could affect the design’s vision.

From left to right: The original hill, the hill after excavation, and Andrew Scott (Principal, San Francisco) in front of the three-story retaining wall while it was under construction.

Highland Hospital also required the demolition of wing buildings to make the new acute care tower. The CE team planned for a selective demolition and shoring of part of the adjacent structures, which facilitated a more streamlined process before the foundations were laid. Thanks to these decisions during the excavation shoring, temporary building support, and historic building monitoring, the 315,000 square foot, nine-story, 169-bed acute care tower came to life with minimal delays.

Stories like these illustrate how costly design decisions requiring resources and effort can instead be spent in the CE world where creative solutions abound. In the case of Highland, the CE and structural design team were one of the same, run by separate project managers but under the same roof at Degenkolb Engineers. Often the design firm hires a subcontractor that then hires another subcontractor engineer to implement the shoring work, introducing them to the project far later in the design process. “The earlier CE can be in the room, the better,” Robert adds. Not only does earlier involvement prevent potential issues down the line—including making things more challenging and costly to build or even triggering a possible re-design—but can allow for ideas on alternative ways forward to bring stakeholders’ vision to life when creating the next world-class facility.

Robert adds that “the level of understanding, communication, and coordination by having it run out of the same office is happening organically rather than being forced.” This integrated approach has many benefits, especially when communication and coordination are key to CE’s success. Although the integrated CE approach is a rarity with facilities of Highland’s size, comparable projects focused on critical facilities can thrive along this path, making every stakeholder and member of the design team satisfied with the result they are delivering to the community.