Waters in the storm…into the house they’re borne

Chapter 1:  Waters from the Storm

The first sign of trouble at the condominium building appeared in late October 2021. Residents in the third and fourth floor units noticed water leaking from their living room ceilings. More leaks appeared in the common areas below a fifth-floor balcony.

The condo building was relatively new, finished in 2018, and there had been no reports of previous leaks into the building. The property manager had a contractor come out to investigate and repair the damage. As the contractor began to remove damaged finishes, more moisture was discovered in the walls and ceilings. Repairs were made, but several months later, in December, more leaks appeared.

A few miles away at a large single-family home, a family of four had recently returned from an extended trip out of the country. It was just before Christmas and, during a storm, the family noticed water dripping from the ceilings in the living room and kitchen. Additional leaks would be discovered in the guest room, recreation room, and garage. The family reported no prior leaks in the home. The custom two-story home was built in 1982 and had stone walls, Mediterranean-inspired architectural elements, arched windows, curved ceilings, hardwood floors, and decorative paintings over Venetian plaster walls.

Across the Bay in an iconic three-story Victorian home, the homeowners noticed a sudden water leak in their garage after a storm in late December. The water flowed openly across their garage floor and out towards the street. When a reconstruction contractor came to the home to repair it, extensive rot damage was found behind the finished walls and ceiling.  It was clear that water had been getting into the walls for a long time, but had only recently leaked into the garage.

Water leaks had appeared at all three properties around the same time—during the rainstorms that blew through the Bay Area in late 2021. But each home was so different—the first, a relatively new condo building; the second, a large 40-year-old home in a suburban setting; the third, an historic Victorian home built in 1900. All three homes had damages that required extensive repairs.

The question to be answered: Were the two big storms in October and December the cause of damage to all three properties? Or were there pre-existing conditions that the storms suddenly exposed? Degenkolb was hired to find out, and sent out forensic engineer Steve Moore.

At the condo building, repairs were already underway after the storms. The contractor had removed some of the wall finishes, covered up the fifth-floor balcony with temporary plastic tarps, and sealed open exterior joints with caulk and backer rod. There were no obvious openings where the water could have entered, but the leaks continued during subsequent storms. Inside the walls, Degenkolb’s Steve Moore probed the stained wall framing where he found solid and firm wood and lightly rusted fasteners with no evidence of long-term moisture exposure. With the plastic installed over the balcony and all exterior joints sealed, how did water continue to leak into the units below?

Down the road at the large single-family home, the evidence told a different story. French doors in the bedrooms and playrooms open to balconies and walkways on the second floor. Floor drains were supposed to have captured rainwater before it entered the residence. We noticed, however, that the wood at the threshold of each door was warped, separated, and split. We also noticed that the floor drains were filled with leaves and other debris. Plants had started to grow up through the drain covers, effectively blocking them. But did this translate to water in the living room ceiling? If so, how?

Across the Bay at the 120-year-old Victorian home, the challenge was following the evidence of water damage to its source. Inside the garage, behind the removed wall finishes, the damage was evident— stained and rotted framing members in the corner around a rainwater drainage pipe. We followed the damage to a second-floor balcony above the garage. Upon examining the balcony floor above, we noticed intact conditions with no obvious voids or cracks in the floor tile around the roof drainpipe. How was the water getting through the balcony floor?

At each residence, it initially seemed the storms were responsible for the damage, since there hadn’t been leaks before or significant rainfall due to the ongoing California drought. But by peeling back the layers and examining the evidence, a few clues were revealed that pointed to other reasons.

The exterior wall finishes on the condominium are comprised of stucco, which is designed to allow rainwater to penetrate through the cement plaster and then drain out the bottom. On a balcony, the bottom of the stucco drains onto flashing at the wall-to-balcony intersection. The flashing directs water to a drain system in the balcony floor assembly. The cause of the water intrusion was missing or improperly installed flashing at the wall-to-balcony intersection, likely the result of an original construction defect. The condition hadn’t been noticed earlier because not enough rain had fallen since the condo had been built to become a problem.

At the large single-family home, we determined that when it rained sufficiently, water from the balcony overwhelmed the blocked drain, pooled on the balcony, and then overflowed the thresholds into the floor assemblies. We observed that the wood at the door thresholds was warped and there were deep cracks in the grain. When wood is damaged by water, the cycle of wetting and drying become exacerbated each time. Cracks in the wood become deeper, the cellulose breaks down, and it becomes easier for water to penetrate the next time it rains, causing further damage. It was clear that the wood had become wetted and dried several times before the storms in late 2021. The cause of the water intrusion was a lack of maintenance of the exterior drainage, which resulted in significant water penetration during the large storms of 2021.

At the Victorian, it was clear that the moisture damage to the framing had been occurring for many years, but the water had not previously flowed into the garage. Upon closer examination of the balcony, we identified a failed joint at the guardrail intersection with the exterior wall. The failed joint was the result of dried and cracked sealants and paint, which allowed rainwater to penetrate the wall cavity. The failed joint had been allowing water intrusion for many years, but it was not until the excessive flow in December 2021 that the long-term deterioration was revealed. 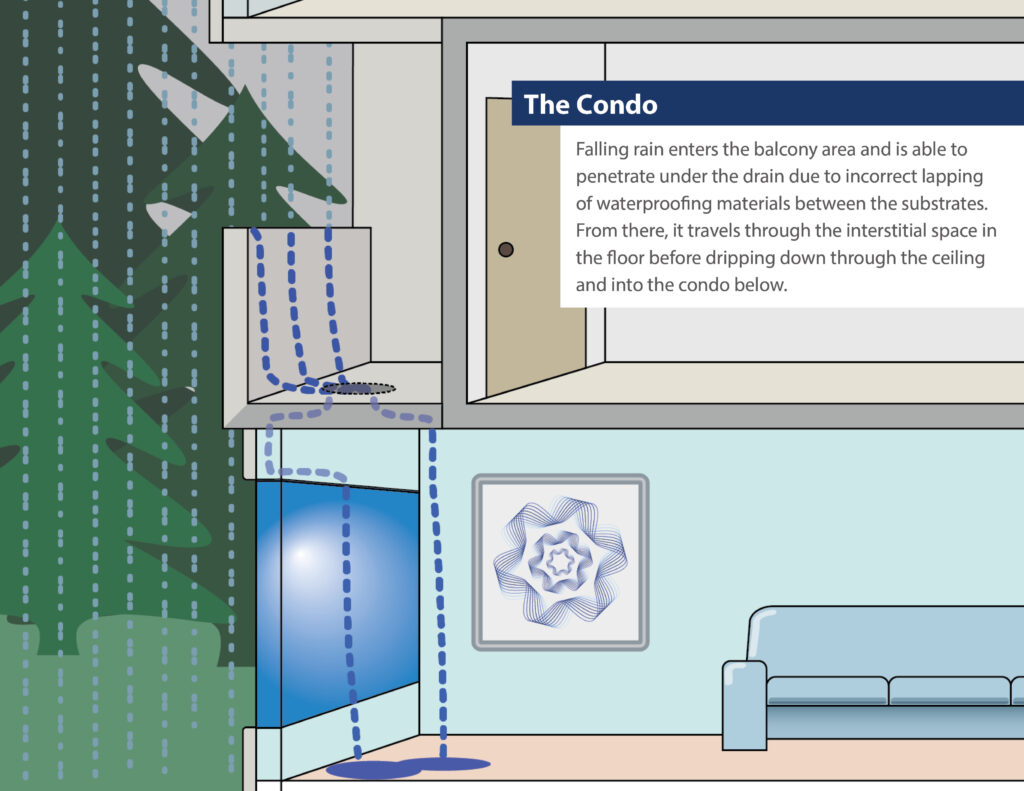 Falling rain enters the balcony area and is able to penetrate under the drain due to incorrect lapping of waterproofing materials between the substrates. From there, it travels through the interstitials space in the floor before dripping down through the ceiling and into the condo below. 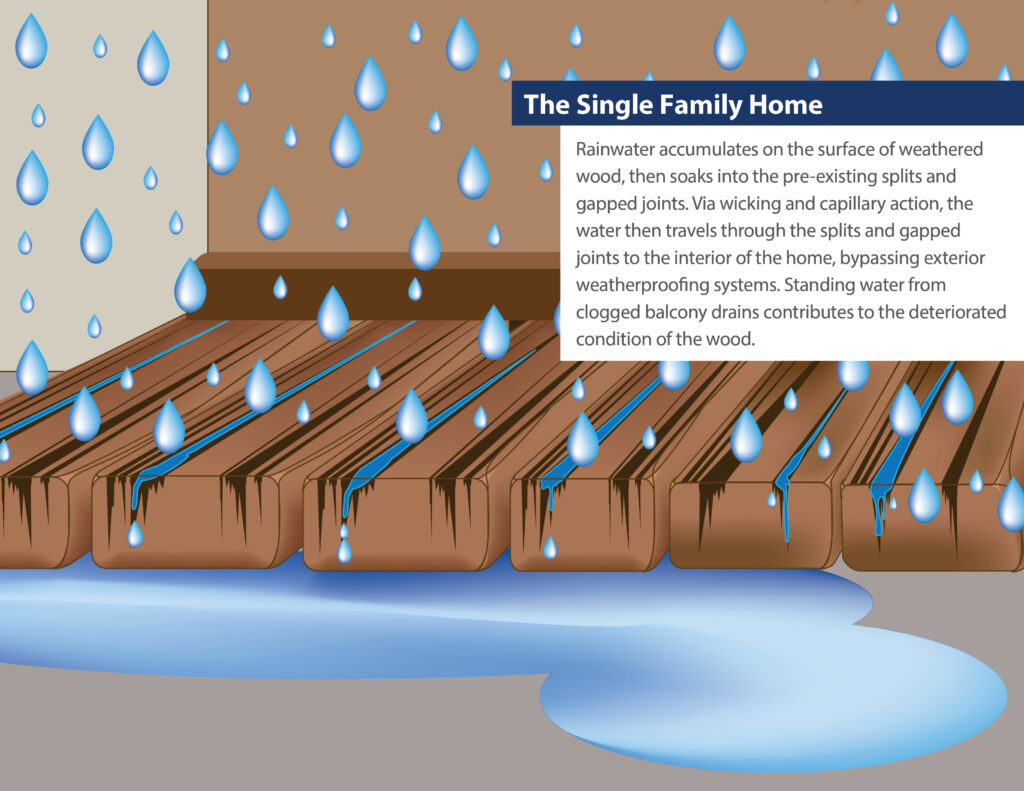 Rainwater accumulates on the surface of weathered wood, then soaks into the pre-existing splits and gapped joints. Via wicking and capillary action, the water then travels through the splits and gapped joints to the interior of the home, bypassing exterior weatherproofing systems. Standing water from clogged balcony drains contributes to the deteriorated condition of the wood. 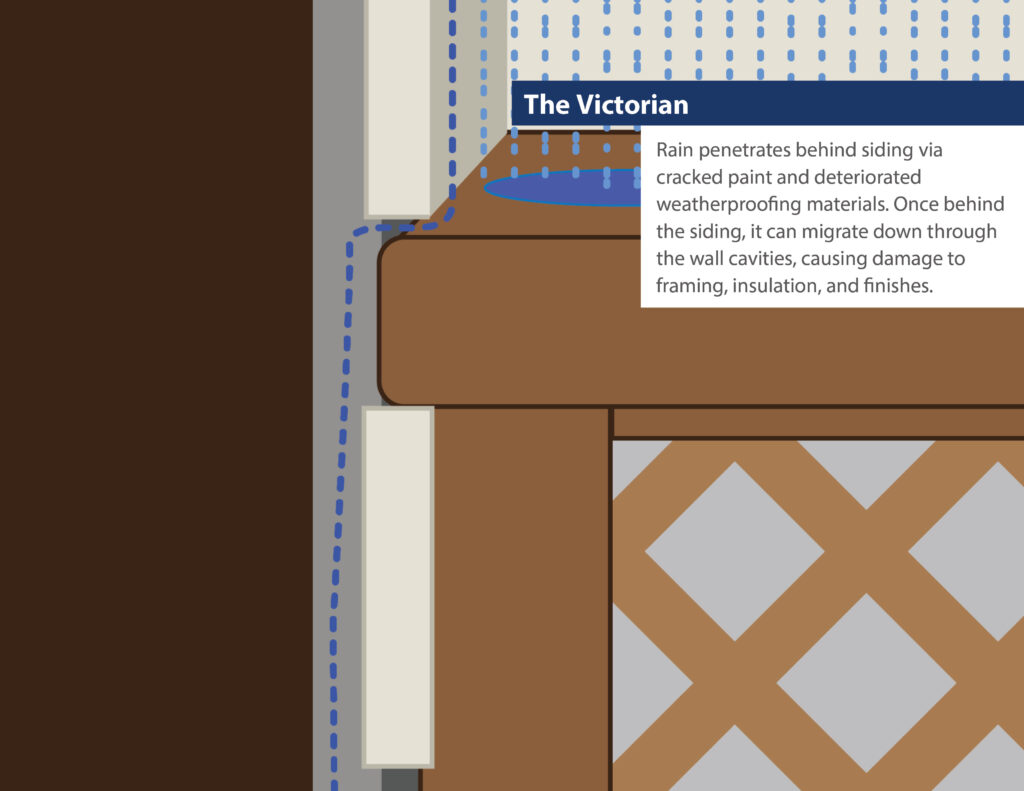 Rain penetrates behind siding via cracked paint and deteriorated weatherproofing materials. Once behind the siding, it can migrate down through the wall cavities, causing damage to framing, insulation, and finishes.

Each building had first noticed water intrusion during significant storm events in late 2021. Without any history of prior leaks, it was initially believed that the storms had caused the leaks. But after careful forensic assessments of each location, the physical evidence revealed the actual causes: different pre-existing issues that had manifested well before the rains fell—an initial defect in construction, a lack of routine maintenance, and dried and cracked sealants and paints, respectively. These three examples of sudden rainwater intrusion illustrate the importance of taking the time to closely examine and follow the evidence path and to not just blame the damage on the water in the storm.

To speak with a Forensic Engineer or to schedule an investigation, contact Steve Moore at smoore@degenkolb.com.

Other articles by Steve Moore: