80 Years of Excellence: Working With Henry

In the next part of our 80th Anniversary series, we talked to Jay Love, Senior Principal at Degenkolb, who discussed what it was like to work with founder Henry Degenkolb 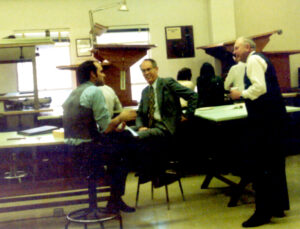 Henry Degenkolb was a long-time consultant for the University of California, and in the summer of ’79, he and Loring (Wyllie) were conducting evaluations of 11 buildings at UC-Berkeley. The UC system was aware buildings needed seismic retrofits and needed help determining which buildings to do first. U.C. tasked Henry and Loring with creating a retrofit strategic plan that covered these first buildings, and Jay, who was interning that summer, was put on the project. After examining each building, the team put together a conceptual plan, estimated cost of repairs, and wrote a report that included a cost-benefit ratio that helped Berkeley determine which buildings to retrofit first based on a variety of factors. This was the first time the University had asked for such an approach, one that presented monetary retrofit costs alongside number of lives saved by the retrofit After that initial study, additional ones followed, including the retrofit design for University Hall, McCone Hall, Soda Hall, Doe Library, Bancroft Library, LeConte Hall, and the off-campus dormitory towers. Since then, Degenkolb has performed many more evaluations of the buildings at UC-Berkeley, as well as numerous other campuses throughout the UC-system and various public and private entities throughout California. 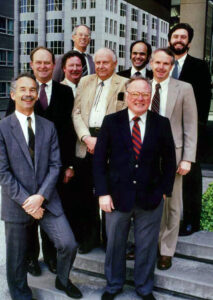 Henry, center, poses with the group while Jay smiles from the back row, right.

For Jay, one of the most interesting things about his internship was that he had direct, day-to-day contact with Henry Degenkolb, something that not every intern, or even full-time engineer, had. By the luck of the draw, Jay was the intern chosen to help with the UC-Berkeley seismic retrofit project; as a result, he had the unique opportunity to work closely with Henry. This open access to the company founder had a profound impact on Jay. Henry was always happy to answer questions from the younger engineers, and to this day, Jay (and other senior principals at the firm who worked with Henry) have an open-door policy at the office. Senior staff make a point to generally be approachable and available for younger engineers who may have questions.

That’s not to say that Henry let Jay off lightly, however. It was well-known outside the firm that Henry did not suffer fools lightly and could sometimes come across as intimidating. Though Jay had a strong mentor/mentee relationship with Henry, there was one occasion where Henry made Jay jump. Jay was working on a small hospital project in the central valley. The contractor proposed a change in the design, from one approach to another, and written to Jay asking for sign-off on the change. Jay checked with the principal in charge and composed a reply letter indicating the change would be acceptable; that reply was put in a pile of mail to be sent out. At that time, the firm only had five principals; the tradition then was that any letter going out of the office was put in a bundle of letters that was circulated amongst the principals to read. Henry, in particular, liked to keep track of stuff going out of the firm, and came across Jay’s response to the contractor: “When the hell did we start letting contractors design our buildings?” Henry bellowed as he came down the aisle between the desks, bearing down on Jay. After taking a deep breath, Jay pulled out both designs and showed them to Henry, explaining the change and why he had approved it. Henry harrumphed and muttered, then quietly murmured “ok.” Just then, over the intercom came a voice “Henry, phone call on line one,” and Henry left, presumably in search of a phone to take his call. After that, the matter must have been resolved as Henry didn’t bring it up with Jay again.

This interaction also reflected Henry’s belief that Degenkolb’s role was to protect the interests of the building owners over the contractors’ interests. He preferred working with owners to help protect their financial interests in their buildings, as well as ensure they weren’t being taken advantage of by their contractor. He strived to ensure that building owners received the full value of their seismic design and was adamant about working on their behalf.

Article
When Mother Nature Forecloses on a Property
04.23.2021
Read More